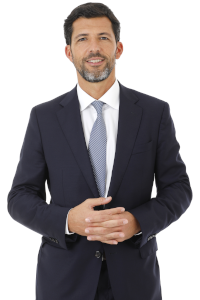 Born in 1974, Miguel graduated from the Portuguese Catholic University in 1998, having attended the Katholiek Universiteit Leuven, Faculty of Law, in Leuven, Belgium, between September 1997 and July 1998. He was admitted to the Portuguese Bar Association in 2001.

Between 2005 and 2008 he practiced as a Senior Associate at the Spanish law firm Mullerat, S.L.- Sucursal em Portugal, where he was specialized in Corporate and Commercial Law, Property & Leisure, Litigation and Arbitration.

During the last 12 years he practiced at PLMJ where he was a Partner and Head of the Mozambican practice. He predominantly handled Corporate and Commercial Law, M&A and foreign investment in in African Portuguese Speaking Countries in areas of expertise like property and leisure, construction and energy (renewals and oil & gas).

He has participated and is regularly involved in large cross-border and national transactions in very diverse sectors such as financial services, oil & gas, power and renewable energies, real estate, environmental services and construction, chemical and franchising, advising and representing both Portuguese and foreign clients.

He is a member of the Portuguese-Mozambican Chamber of Commerce board and has been involved in the celebration of protocols and implementation of projects involving Mozambican Universities and professional associations aiming to create training programs for Mozambican Junior Lawyers and law students and in the support of Mozambican children assistance programs.

He has been named by Iberian Lawyer in its '40 under Forty' awards as one of the 40 best lawyers on the Iberian Peninsula under the age of 40. He is also mentioned in several directories like Chambers and Legal 500, as Foreign Expert for Mozambique in Corporate Law / Merger & Acquisitions.