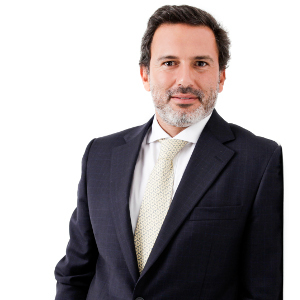 Born in 1974, Tiago graduated from Lisbon University in 1997, obtained a post graduate degree in Securities Law in 2001 from the same university and participated in the 3rd Edition of the Advanced Executive Training Programme in Public Private Partnerships at the Portuguese Catholic University (Faculty of Economic and Business Sciences).

Tiago has practised at Abreu & Marques, Vinhas e Associados for 9 years in the finance and banking department and also worked in London at Slaughter and May between February and September in 2002.

He specialises in commercial, finance and banking law and has participated in several Portuguese and cross-boarder commercial and financial transactions advising foreign and domestic financial institutions.

Tiago is especially known for his experience in the area of derivatives and structured finance.

Tiago is one of the founding partners of PLEN, and is the head of the banking and finance area of the firm and co-head of the commercial law area.